Bren Emrys, or King Ambrosius, is one of those half-mythical kings who are said to have ruled Britain after Rome left the island to its own devices. Legend (and John Morris) has it that Ambrosius Aurelianus succeeded King Vortigern, who notoriously invited the Saxons Hengist and Horsa to Britain. Ambrosius' reputation is as good as Vortigern's is bad - because it was Ambrosius who is said to have been successful at pushing the Saxons back.

One of Ambrosius' clever moves was to befriend a sorcerer born from the union of a demon and a nun: a young man called Merlin, or Myrddin in Welsh. It was at the request of Ambrosius that Merlin used his stupendous magical power to transfer from Ireland to Britain a monument known as the Giants' Ring. Nowadays we call it Stonehenge. Merlin's association with Ambrosius earned him a second name, and he became known as Merlin Ambrosius, or Myrddin Emrys.

When King Emrys, scourge of the Saxons, lay ill, a Saxon spy disguised himself as a priest and, pretending to offer the King medicine, poisoned him. Emrys was buried in Stonehenge and succeeded by his younger brother Uther, called Pendragon, who would soon father Arthur.

So that is the story of Emrys in a nutshell :-). 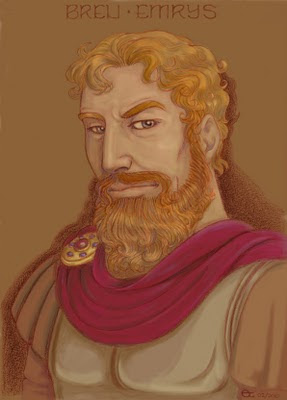 King Emrys doesn't actually appear in my comic. He is only referred to on page 9, ushering in his brother Uther, one of the main characters of The Darkest Hour. This portrait of the king was drawn at the request of my friend Sien, who earned herself a gift picture by being the 3000th viewer of this blog. Sien's adorable baby boy is called Emrys, hence the subject :-).

It is my first painting in Photoshop, so I beg your indulgence. The linework was done in pencil. By my standards, this portrait is unusually realistic. I don't go looking for realism, normally, but I found that painting with Photoshop somehow invites it - at least for a beginner like me. I lost count of the hours I spent working on this, but it certainly was great fun.
Posted by ampersand at 12:38 No comments:

Used my tiny new Wacom tablet to do a 'pastel'. It looks more like paint to me, but it was fun :-). 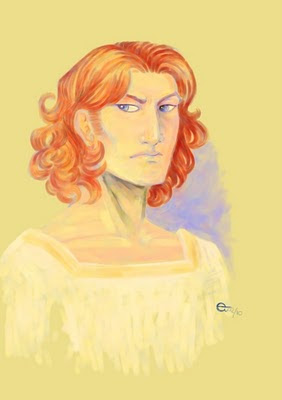 ampersand
shows more enthusiasm than talent in art, but she promises to tell you a story.