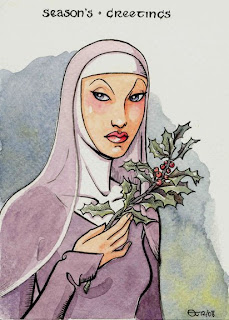 (Please try the large view; somehow the reds look dull in the preview.)
It's a bit late, but here they are: my best wishes for the holidays :).

Every year I paint a number of cards by hand, because I know there are a few people who like getting one of my pictures. I have been doing this since I was a teen, and always integrate a character that fascinates me at that moment. I have a distinct memory - and some physical evidence, unless I am much mistaken - of drawing Gawain as one of the three kings, somewhere in the nineties. This time, I picked Morgana. That's basically because this card was done for Nout, whom I have been sending ugly wizards for years, so I thought he'd be pleased to get a picture of a beautiful nun for a change ;-).

The inks were done with brushes. I'm particularly happy with the lady's face: her skin is really luminous, and her mouth is as perfect as I'm likely to get it. The paper is Fabriano - I chose it in an attempt to attract some of Cecilia's watercolour mojo ;P. Well, I don't exactly reach Cecilian levels, but for me it's not at all bad...

Have a wonderful new year!
Posted by ampersand at 11:55 No comments:

I finished Der Rote Ritter. Eine Geschichte von Parzivâl (Adolf Muschg, Suhrkamp 1993) this week. I'm glad that I made it, but sad that it's over. It's a great, great novel and I only wish I could ever create a work like that. *sigh*
I'm always trying to recommend the book to people, but unfortunately it does not seem to have been translated. So unless you know enough German to read a 992-page Swiss novel, I guess you will just have to take my word for how good it is :-).

Anyway - my task now is to shake off Muschg's version of Gawain's adventures at the Castle of Maidens and to formulate my own. It is funny how I feel more or less obliged to stick to Chrétien and Wolfram's accounts of the Grail adventure. I have to remind myself that I can really deal with it any way I want. Best of all, Chrétien's story breaks off just as Gawain has survived the ordeal of the Bed of Wonders, so I can really take it anywhere from there. I can introduce Morgana in the tale if I like. I can make of the duel with Guiromelant/Gramovlanz whatever I like. It's like fanfic, but better. Hah!

Now, one effect Muschg has had on my (poor) storytelling brain is seriously to rekindle my interest in the character of Orgelûse (Chrétien's Orgueilleuse de Logres) - the lady I call Kundry (because to my mind Orgueilleuse isn't a proper name but an epithet). I have been drawing quite a bit of Kundry as a consequence.

When Gawain first sees her, she is sitting by a well under an elm tree, looking at herself in a mirror. Gawain falls in love with her on the spot. And she looks through him. Oh, she's wonderfully snarky! - In any case, I would like to do a nice picture of her in watercolour, and I have made a few quick sketches that I rather like. It will take more effort before I can turn them into a painting, but... 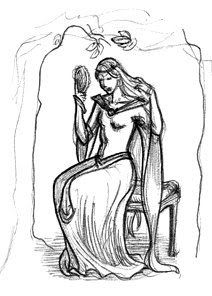 The version above is the first that I did; in reality it's even smaller. It was drawn with a ballpoint pen, and so is the one below: 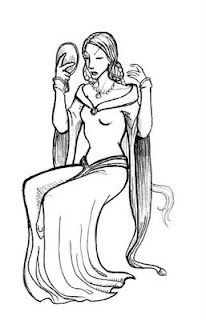 (Click to view a larger version.)
This is another typical example of my very wrong way of going about pictures :-). I start drawing the character, and then I start to worry about their surroundings. I think the normal thing would be to draw the place where the character is supposed to be sitting, think out the composition, and then place the character in the surroundings. Me, I really only care about the character, so I finish it entirely, and then stop because I suspect I am going to ruin the picture by my ineptness at drawing surroundings :/. So she's not sitting on anything. Ah well.

I have much, much more, but no time right now to comment on it, and as they are all sketchy pictures, they need some text. So: more soon.

Posted by ampersand at 19:18 No comments:

ampersand
shows more enthusiasm than talent in art, but she promises to tell you a story.